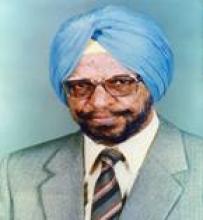 Born at Taran in Amritsar District on 19th March, 1923, Dr. G.S. Randhawa obtained M.Sc. (Agri.) in Horticulture in 1945 from Punjab Agricultural College and Research Institute, Lyallpur (now in Pakistan). In 1946, he was selected by the Government of India for higher studies abroad. He obtained M.Sc. (Agri.) degree in Horticulture from Toronto University, Canada, in 1947 and Ph.D. degree from Michigan State University, USA, in 1949.

Dr. Randhawa published over 200 scientific papers in leading Indian and foreign scientific journals. He guided 16 Ph.D. and 20 M.Sc. students. His research work included improvement of grape, plant growth regulators, taxonomy (including chemo-taxonomy) and nutritional studies in banana. Dr. Randhawa showed great dynamism in developing the Indian Institute of Horticultural Research. He was awarded the Grant Gold Medal in 1975 in recognition of contributions he made to horticulture in India.

Dr. Randhawa visited the U.K. in 1970 to attend the FAO Conference on Fruit Tree Propagation and the Symposium on Tropical Horticulture. He also visited Nepal in 1972 to study the problem of citrus decline. He visited USSR in 1964 to study viticulture and toured Bulgaria in 1976 to study various agro-industrial complexes there. He visited Australia in April-May 1978 to identify and suggest areas of mutual collaboration in the field of horticulture between the Indian and Australian research institutions.

Dr. Randhawa was associated with several professional societies, for instance, he was Member, Editorial Board of Food Packer, Progressive Horticulture and Punjab Horticultural Journal, and, Secretary, Indian Academy of Horticultural Sciences. He assumed the charge of Secretary, Horticultural Society of India, in 1955.

Dr. Randhawa's other enduring interest was hockey. He captained the Indian Hockey Team in New Zealand and Australia during 1955. He also toured Afghanistan as Member,Dhyan Chand Hockey Team in 1952.